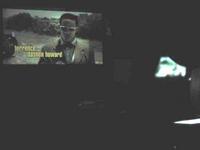 Last night was the first test of the RAV4 Cinecar (call it “Beta 1”). Menzies, Ray and I hopped in the RAV4 and rode down to the Longs on University/San Pablo for some late-night viewing of the movie Ray.

The fact that 1) the set up even worked this first time around, and 2) for such a long movie, is nothing short of a miracle. The only minor annoyances were a scratched DVD and a reception problem with the radio due to electric interference. A longer cable or upgraded FM transmission device would solve this problem.

The location felt right, but it wasn’t ideal. Firstly, though the current setup doesn’t generate much noise pollution, this was a residential area, so further viewings may generate complaints just because of the light. Furthermore, the optimal viewing wall was very high – much higher than the puny viewing angle allowed by the RAV4’s windshield. Sure, it would have been really cool to project a 100 ft screen, but not if we had to crane our necks out the side windows! So we positioned the image lower – still achieving a 35ft (?) image, but with some interference over some gratings in the wall. The occassional car didn’t prove too annoying.

We were all a little gunshy, this being the first viewing and all, so we were amused when people would drive by and slow down to have a peek at our movie. The one scary/funny bit came about mid-way through the movie when a cop car came sliding down the parking light straight for us. I had one hand on the power switch and the other on the ignition, but the cop just went right on by. This was an excellent first stress test on the system – apparently this is not something cops are too concerned about, let alone have time for. I take this as a virtual stamp of approval, don’t you?

All this follows yesterday’s installation of the new wire that runs from the battery to under the passenger seat, where the power inverter and DVD player now call home. This signals a significant advance over early-development models of the Cinecar, which involved popping the hood to access the battery. Pictures and more details about the current equipment will be written up in short order.

For now, stay tuned to this site for information on our first official launch. It’s going to be soon!